In VS 2011 Developer preview, markup intellisense for all ASP.NET server-side events will show you list of exiting handlers and a value called “<Create New Event>” . Which means you can attach the event with some exiting event handler or  select “create New event” to generate an new  handler with the right signature in the code-behind file.

If there is no control Id provided, Visual Studio will consider the control id as “Unnamed” and will generate the event handler as shown in below.

If you are wondering  about what will happen if there are multiple controls  without ids, does Visual studio going to attach with same event handler? No, It will  append an incremental number with event handler name.

Smart Tasks within the HTML Editor

This helps to configure the controls from HTML Editor, instead of moving around both source and design view every time.

This is very handy and quick time saving features and a much required during code refactoring. Consider a situation where you have designed some web pages which are quite large or you have realized that it would have been better to put some part of web page in a user control  so that you can use it  in multiple places. Yes,  manually this is a big process  to create controls, copy – past code and refer them in page. Well, VS 2011 Developer preview  makes this very easier. In source of HTML Editor you will have option called “Extract to User Control” .  Select the code block in HTML Editor which you want to move as user control and select “Extract to User Control” from context menu. 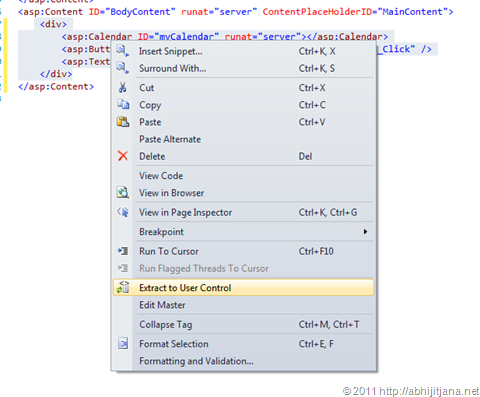 This will launch “Save As” dialog for user control. Provide the “User Control Name” and click “Ok”

Page inspector  is not installed by default with VS 2011 Developer Preview.  You have to install it separately  and the best possible ways to installed it using “Web Platform Installer” . 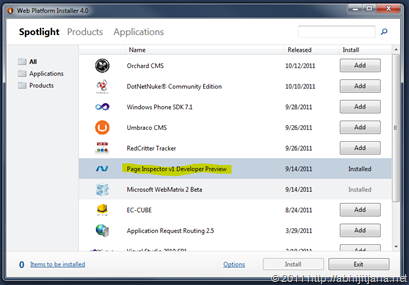 Once you have Page Installer installed, you will get “View In Page Inspector” option with the source view , Design view and even from solution explorer. 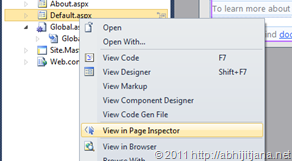 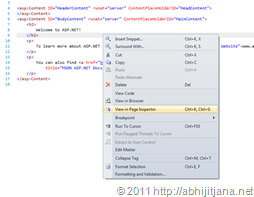 Select “View in Page Inspector” option to start inspecting the page. This will launch your page with in Visual Studio with other tooling support to inspect your pages using which you can start inspecting page styling with in visual studio itself.

This is just a quick introduction of Page Inspector Tool. I will suggest you to read out the Page Inspector v1 Developer Preview Release Notes for more information. Yes, this is a really great addition.

IIS Express is a lightweight, self-contained version of IIS optimized for developers.  Visual Studio 2010 SP1 allows you to build and test web applications using IIS Express instead of the built-in ASP.NET Development Web Server (Cassini) . But, Cassini was the default browser for Visual Studio 2010 SP1, and you need to change default value from project context menu to “Use IIS Express” .

I have published one tip on How to Use IIS Express for all new file based web sites and projects ? with Visual Studio 2010 SP1. But now, you really don’t required to change that. This feature came as default settings in Visual Studio 2011 Developer Preview.

Navigate to Tools > Options > Projects and Solutions and then Select “Web Projects” . You will find “Use IIS Express for new File based web sites and projects” selected by default. Which means Visual Studio 2011 Developer Preview will use IIS Express as default web server.

If you want Cassini to be back as default, you can uncheck this option and if you want to use Cassini for a specific project, select “Use Visual Studio Development Server..” from project context menu.

Boost up your developer productivity

Disclaimer : The opinions expressed here are my personal and do not represent my employer’s view in any way.
%d bloggers like this: